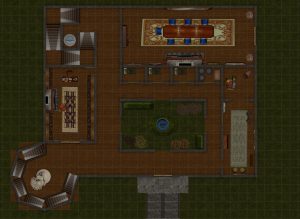 It was an unusually cold, July evening as Tagal and Lasun stumbled out of the tavern. Lasun, ever believing himself to be the more practical man of the two friends, turned toward Tagal, “You sure we can’t stay for just one more. The fire in the Cocksure is roaring and this wind is going right into my bones.”

“You know as well as I do Lasun, that we have an early rise tomorrow. Unless you don’t want the job,” questioned Tagal? Lasun was a bit slow in his response, and Tagal gently shoved his friend forward, “Come on! I’ll see you to your house. And I am sure Takara already has the bed nice and toasty for you.”

Though swerving a bit down the alley, they were heading in the general direction of home. Oblivious to anything other than their stories and their drunken mirth, the pair didn’t notice the shadowed figure observing them, and who followed them once they passed. Before making the final turn that would lead the revelers to home and bed, the mysterious observer sprang into action. Moving with speed and agility, the gap was quickly closed, and she rushed past the two, “Pardon me, sires, clumsy me; I am so sorry,” bumping into each of them.

She was already forty feet down the alley before it registered to Tagal and Lasun that anyone had run into them. Tagal, ready to protest the indignity, halted the words in his mouth when he noticed the rather pleasing silhouette of this careless maiden. “No harm done, my dear,” he shouted to the retreating figure, “you’re welcome to do it again if you like.”

Unbeknown to the two, the mysterious woman had seamlessly deposited one, bright, blue opal into each of their pockets. They made the turn, and Lasun’s house was at the end of the lane. The lights inside were still on, which did not bode well for Lasun. Both he and Tagal knew that Takara was prepped to give them both a piece of her mind. The door opened, and even in the dim light of the moon, the scowl on Takara’s face was evident. However, it quickly turned to concern and dread as a bright, blue mist began to envelope the two men. And before a scream could escape Takara’s lips, the mist imploded, sucking the two men inside, and they vanished.

Tagal was the first to awaken. He felt the effects of the previous night’s libations. He had a throbbing headache and his mouth was parched and rough. He flung his arm to where the table holding his morning swill was located, but instead of the familiar hardness of oak his hand slammed into the softness of Lasun’s gut. Lasun let out a groan at the unintentional sucker punch. Tagal attempted to wipe the haze from his eyes and prod his friend awake, “Wake up, you old bat, we’ve done woken the sun again. Takara’ll have your hide as usual.” The sudden realization of his last conscious memory broke through his bedraggled mind. “Lasun, get up now,” he warned.

Lasun had not yet realized their predicament, and upon looking around noticed the elegant dining room they were lying in. “Are we at the magistrate’s house,” he slurred.

Before Tagal could respond, he heard and saw the stirrings of three other people lying on the floor 10 feet away. All three strangers to him. A short and wiry man in his mid-thirties was the first speak, “Damn, Kingsholm certainly has a right fine drunk tank. If I paid taxes, I might have to complain.”

A younger woman with a passing resemblance to the man responded, “Shut up, Jattal, I’m not in the mood for your games this morning. Now, were the hell are we?”

“Perhaps we should ask those two,” a stocky woman in her early-forties said, pointing her finger in the direction of Lasun and Tagal.

“And where is here? I’m Allana by the way,” replied the younger woman.

“I’m Lasun and my stern-faced friend over there is Tagal. And this is Waterton, where I and my,” but before Lasun could finish his sentence Tagal interrupted. “Lasun, I’ve been to Magistrate Hillthon’s house, and this isn’t it. This is not Waterton. There is no place like this in our district,” he spoke nervously.

“What do you mean it’s not Waterton? How could I be anywhere else; I blacked out right before … we got to my house,” as the sudden realization and memory came to Lasun. He visibly slumped his shoulders and rested against the wall.

The older woman, in a motherly tone, “Lest we forget manners, my name is Karanna, and before we get too worried about our predicament, why don’t we try seeing what is on the other side of the door at the far of the end of the room.”

At her suggestion, they all turned their heads to the east and saw the mahogany door with an ornately carved, full-sized relief of a griffon. The party rose to their feet; most felt a little unsteady as they made their first steps, except for Jattal, who sprang up and confidently strode toward the door. Crossing the seventy-five feet with a jaunty step, Jattal reached out his hand to touch the door knob. It was cold to his touch and refused to twist. Turning to face the others with a shrug and a resigned expression on his face, his hand left the knob, and a clear and distinct voice echoed in everyone’s head. “Welcome friends, or perhaps we could be. My sincerest apologies for your inconvenience but it could not be helped. I require your services, but first you must prove your worth. Simply leave the room,” the interior voice commanded.

Allana quickly interjected, “You certainly have a strange way of conducting an employment interview. If you had been a little more traditional, you’d have discovered that my companions and I are currently employed and do not wish to be at your service.”

The disembodied voice continued, “And if you don’t wish to be in my employ, fear not! This room has a way of changing,” the voice paused slightly, “things.”

At the moment the word ‘things’ sounded in her mind, Karrana was inexplicably drawn to the dining table. She grabbed a silver knife from a place setting and plunged it into her leg. Not a sound escaped from her lips. Then she slouched, as if something had released her, and Karrana screamed with pain. Jattal was immediately beside her, grabbed a napkin from the table, and tied a bandage to her leg to stop the bleeding. “Just leave the room and all will be well,” the voice in their heads reminded the prisoners and was silent.

After a brief pause, Karrana barked out her orders, “Jattal, quit fussing and unlock that door. Allana, scan the room, look for unexpected breezes and disturbed dust.” They quickly moved to comply with Karrana’s instructions. She then pointed to Tagal, “You, dour-faced one, it’s Tagal right?”

“Right, why don’t you see what we have in terms of provisions and weapons. And your friend,” Lasun had slumped back to the ground again, “Hey! Snap out of it, we need you right now, Lasun. Help Tagal.”

Lasun began to focus on his assigned task and kept his mind occupied. Tagal, however, was not ready to cede authority to this stranger and surveyed the room. He couldn’t put his finger on it, but something didn’t seem right about the place. And his blasted headache wouldn’t go away, even his hangover didn’t seem quite right. He whispered to Lasun, “Something seem off to you?”

“Besides that we’ve been kidnapped,” Lasun replied.

Tagal dismissed his own question and began to assist Lasun. No matter how he tried to focus on the task at hand, he couldn’t shake his feeling of uneasiness that something else wasn’t right about the place. After several minutes of absent-mindedly following Lasun around, Tagal swallowed his pride and approached Karrana.