If you’ve watched some of my YouTube videos, you know that I’m running a Starfleet Intelligence game

within Star Trek Adventures.  Up until this points, I’ve sort of been running it off the seat of my pants; in other words separate, little, unconnected mission operations.  I’m looking at pulling some of it together in a larger story arc.  After all it’s ultimately a spy novel in the Star Trek universe and so there needs to be a KAOS to thwart.  I’ve decided that not every mission will be directly connected to the larger arc; the players ultimately need to stumble upon the conspiracy and not have their SI Commander just dump everything into their lap.  But if they need to find the clues to piece things together, I have to drop those plot points along the way.  How is that done most effectively?

It is a balancing act.  If it is too subtle, the players will miss it.  And then what would have been the point in developing it all along?  However, if it is too in your face, there is the possibility that the players won’t find it a fun and engaging experience or will simply reject the mission and search for something else.  The key is an avalanche – it’s my term and so I can call it what I want.  The idea of an avalanche is that it starts as something small that builds into what becomes an unstoppable force.  I have a basic, four-step approach I use: 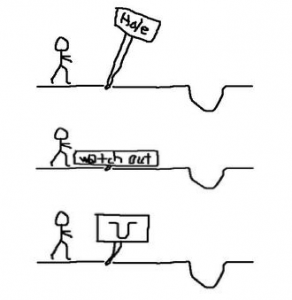 The First Hints are Small

Not necessarily in every mission storyline, but in a large proportion of them, the game master should toss in one-liners that are extremely subtle or objects that are tangentially related to the bigger theme.  The point is not for the players to catch them all, in fact it is probably best if they did not.  It is even possible that the major plot point of a mission or two will involve the larger narrative but only tangentially.  The feeling the players should have at the end of this stage is something isn’t quite right.  And it might be an opportunity to provide the player characters with a sense of déjà vu.  One of my in-game examples for the latter is a Romulan spy who kills himself rather than be captured.  On his body the PCs discover a destroyed two-way encryption device, which only works with its keyed counterpart.  The obvious interpretation will be that the device was used to transfer data between the spy and his contact, but what the PCs don’t know is that the spy wasn’t using the device to talk with Romulus!

At some point, all the cat and mouse stuff needs to come to a head; there needs to be a mission or adventure that directly brings the larger theme into focus.  I’m not talking about the final boss battle, but it is an event that uncovers some truth about the final conflict.  To pull an old 80s reference, at the end of Back to the Future Doc Brown returns to take Marty and Jennifer back to the future, “No, no, no, no, no, Marty. Both you and Jennifer turn out fine. It’s your kids, Marty. Something’s gotta be done about your kids!”  In this scene, it wasn’t even the plot of the movie but the twist changes the focus.  The revelation can about in a variety of different ways, the mission itself brings forth the knowledge, they stumble upon it by accident, someone informs them.  Whatever method used, the basic idea is that the player characters suspicions have been confirmed.

The ignore stage is probably the hardest for most game masters, and will probably be the mostcontroversial step in my process.  The players have new information, and they just want to go after it and follow the plot to its conclusion.  But I think the payoff in the end is well worth the wait.  There are still obstacles in the way, people are willing to protect the secret, a need for patience to lull into a false sense of security, or whatever.  In reality this time period gives the game master an opportunity to go through the theories and ideas of her or his players to incorporate in the future. (Remember that the GM isn’t the only one whose ideas should be used.)  But I also see this as an opportunity to drop more of those subtle hints, which help to confirm the PC’s intuition.  And most importantly, when the final stage begins, it will be a more satisfying story.

Now, all those things the players wanted to do following One Undeniable Truth; now is the time for all of it.  It is at this point that everything starts to fall into place, leading to an inevitable final conflict.  This stage doesn’t need to happen all in one mission, but can play itself out over a series of missions or adventures.  All the subtlety of the past is replaced with bluntness.  Perhaps the conspirators are now ready to make their bid for power openly and call upon others to join their cause.  It has been discovered that the black mage has brought together all the components she requires to ascend to godhood and challenge the pantheon.  Depending on the storyline you are creating, it can still be known to a select few but the player characters have gained all the requisite knowledge.  The enemy has thoroughly infiltrated your base and has used your own tech against you; it is now a race to stop them from delivering the final code, which brings destruction to your side.

Whether a game master uses my method or another one, I think the important element in foreshadowing is that it is possible to see the full picture if the players and their characters keep an eye out for all the clues.  AND there should be some surprise and shock when it’s revealed.  There needs to be logical connections between events seemingly disjointed, at least on the surface, but lead to the grand master plan.

How would love to hear your thoughts: 1) As a game master and how you foreshadow for your players; and 2) As players what plot devices did you find most enjoyable in a story-arc campaign?  Please use the comments down below to help begin the conversation so that we all become better gamers.