So there I was, minding my own business. I was drinking some coffee and going through a new game I picked up. It was published in a game system with which I am familiar so I’m skimming through parts of it looking for the ways it’s tweaked specifically for the game. Naturally, I stop to spend more time reading through the chapter on magic. This one has got to be good … how is Modiphius going to adapt the tried-and-true magic mechanics of Call of Cthulhu to the 2d20 system? (Oh, in case you wondering, I’m reading the Player’s Guide for 2d20 Achtung! Cthulhu … now back to the story.) Okay, various skill tests to cast magic based on a dice pool; pretty standard stuff for the system. Now let’s see; there are spell descriptions, all normal; skill tests, check; difficulty, check; effects, check; costs, what’s this “5 Challenge Dice Drain” or “Stun” or “Piercing X”? I know what those mean in terms of game mechanics as they relate to bad things the PCs and NPCs inflict on their targets, but there is already a section in the spell description describing the effects on the target using similar qualities. I must have gotten ahead of myself, so backtracking up the text. And that’s when I find the explanation of costs,

“All Battlefield spells have an associated cost which is paid when casting, taking the form of mental stress inflicted on the spellcaster, with their Courage and Morale resistance absorbing some of this stress as normal. This cost is applied after resolving the skill test to cast the spell, and applies whether the spell was successfully cast or not.”

Oh [insert preferred, ejaculatory expletive here (I went with Sassafras Jelly myself)]! They’re telling me that using a core mechanic in the game will cause not only harm to the intended target but also to my player character for using it? NOT COOL! Let’s hold that thought a second before we go down a path we might later regret (throwing a laptop across the room is not equivalent to tossing a book). I remember when (I was about to say flipping through the pages but remembered that it was a PDF, so) sliding the scrollbar I saw a healing spell (it’s actually a ritual but let’s not split hairs). Would the same cost be associated with healing magic? And sure enough, there it is for Balm of Belenus:

What in the name of Cthulhu are you folks at Modiphius on? So then I decide to take a step back and thing about it for a minute.

I don’t honestly recall where I read it, it might have been in an introduction for a Lovecraft anthology, but I think it was in Graham Walmsley’s Stealing Cthulhu; so I’m going to say it was for now as I don’t have a copy on hand to check the reference. The Mythos is so much greater, more powerful, and overwhelming to humans that we have no chance against it. If my presumed Walmsleyan reference is true, then the cost mechanic makes sense. Mortals are tapping into something so far beyond them, the forces unleashed are too much for a mere mortal to handle. The energy will do what is required of it but can’t be contained by the will of a simple human. The more I let the idea sit with me, I started to realize I’ve seen this idea before. Perhaps most popularly in Star Wars. The use of the Dark Side of the Force slowly but inevitable corrupts the outward physical appearance of its practitioners. But that’s the bad guys, Yoda always looked that way. And though it’s not exactly the same we see pulling powers from another plane in Brandon Sanderson’s The Stormlight Archives as also having the potential to cause major changes, even quite harmful, to the Spren. Moving outside of literature the same philosophical idea is found in Wiccan practices, the magic cast by a practitioner will revert back to the spellcaster in some form. However, now this concept is part of the actual game design to affect player choices.

Negative consequences to the spellcaster might not be new a new mechanic … I’m not a gaming historian … but it’s not one I’ve run across before. There is the Wild Magic Surge in D&D 5e and there were the old fumble tables from 3.5, but those were still not mechanics that happened 100% of the time when casting a spell. So what does this change do to the way we look at magic in TTRPGs? 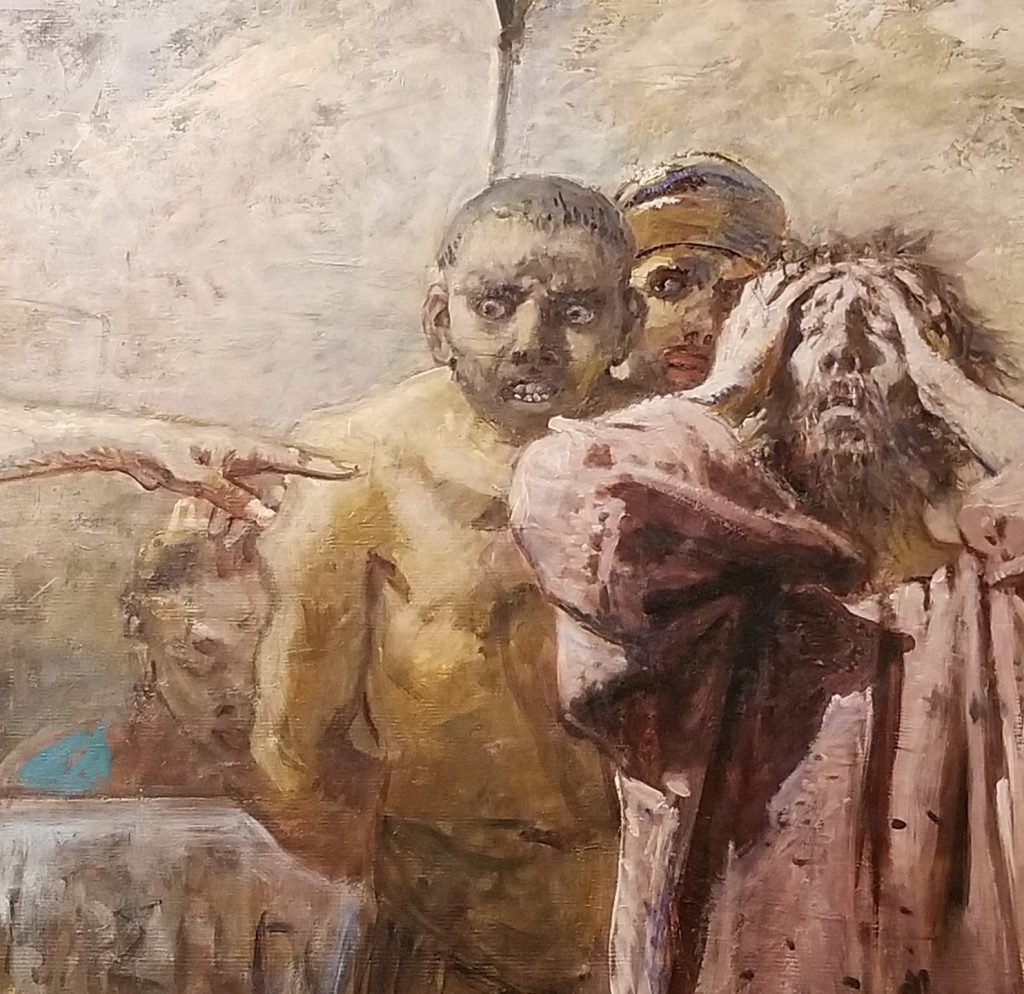 The longer I sit with this idea, the more I’ve warmed to it, and dare I say would be interested to test it out in other magical systems. I do think that it does have a lot to do with how magic works in the particular gaming universe you’re dealing with. In a superhero RPG I think it makes a lot less sense, they are superheroes after all and doing the extraordinary is in the job description. Even in a high fantasy world, which is prevalent in D&D 5e, it would probably be an unwelcome addition. But in Lovecraftian realms or an in-game universe in which magic is not commonplace or is the preserve of a small elite or viewed from a negative perspective or for other, very specific game-lore reasons; yes, whole-heartedly yes it is something to consider.

The current D&D campaign that I’m running takes place in an isolated city, in which all forms of magic have been banned. The in-game reason for the ban is related to a war among the gods that infused so much magic into the world that it warped creatures into monstrous beasts and other massive, dangerous changes to the prime plane. The city’s patronal god used the last of her life force to shelter the city from the ravages of that war; and so under the banner of continuing her sacrificial protection the city leaders destroyed all magical artifacts, spell books, and the condemnation of magic users to “exile,” what that means is not clarified to the populace since there is no connection to the outside world. The Player Characters have a different interpretation as the protective veil, which still covers the city, happened centuries before. They see the magical restrictions as a means for the city leaders to maintain control … and perhaps they are partially correct … but they, themselves, don’t see any negative consequences from their own secret spellcasting. The only cost is that they need to keep it hidden for fear of repercussions from the city leaders, which predictably lead to the PCs’ desire to overthrow the system.

Death from the Uffizi Gallery

The philosophical/theological/ideological outlook may have turned out differently if those same PCs felt pain or suffering when they cast even the simplest spell. Perhaps they may still wish to overthrow a restrictive regime because it removes their agency to make that decision, but it is any interesting thought experiment. The smallest act of kindness, using prestidigitation to clean a smudge off a child’s shirt, has the potential to injure the practitioner. But also a healing spell reinforces a sense of self-sacrifice on behalf of others. In Achtung! Cthulhu the vast-majority of spells cause mental stress, which I think fits into the lore of that world. But even the mana pool from which people draw their magical abilities might have some influence on their decisions too, as well as its abundance or scarcity. If a PC were to cast healing magic and that would shorten the life of the healer, would they still be willing to offer assistance? Or if casting a wall of fire drops the caster’s body temperature to a dangerous level as the spell feeds of their own body? Or what about communicating across great distances if it causes debilitating headaches, would it cause more wars and bloodshed as ambiguous words are left to fester? … And possibly most important, would it mean the decline of magic-users in TTRPGS?

I doubt it would become that extreme, but how would personal, negative consequences to my player character affect how I use magic in game? My first reaction would be that I’d probably be quite gun-shy to employ it. Not using it, however, places a great disadvantage on my PC and our adventuring party against those without the same qualms. It becomes then a question of risk-assessment; I would need to choose when the negative consequences outweighs the advantages. It also raises the real, in-game, possibility of needing to make the “ultimate” sacrifice for the good of the party. It adds another level of strategy and tactics to the game … or just maybe make us look at the core values from which our PCs act. (And yes, that is a subtle or not so subtle hint to re-examine the ideas of alignment).

The direction Modiphius employs in the Magic mechanic probably won’t create a new standard in the application of magic in tabletop roleplaying games. As a new paradigm it would unnecessarily limit magic in some games that aren’t focused on a grittier or more sinister look at magic. But I think in the right context, it is something for future game developers to explore and for gamemasters to consider homebrewing in their games. Magic users can become OP in a lot of systems, which is off-set through making them weaker in strength or with less hit points. However, the way magic often works is that at some point the magic users are able to overcome those early disadvantages with their magic. If magic is constantly draining something from their practitioners regardless of the level, it may help to continue to balance those player characters in higher levels of play.

One final thought on magic limitation revolves around the idea of a finite magical resource, whether it is a personal limit or a world limit. I think it would also create interesting story and character development. Imagine a character whose reliance on magic required them to accomplish everything they wanted quickly before their very source of power took everything from them. The absence of wizened wizards to mentor the younger? I might also be interested in exploring a world in which a powerful magic user was hoarding the world’s mana pool for themselves. Another campaign building action might be to explore how the world experience the loss of magic as it is slowly is siphoned away from over use or exploitation.

Magic or magic-like abilities are a staple in the tabletop gaming world. And as I said, it may not be all that new of an idea, but mechanically reworking the system, not just tinkering with it, seems an interesting idea to explore. What other ways might we take a look at magic to give it a new perspective?