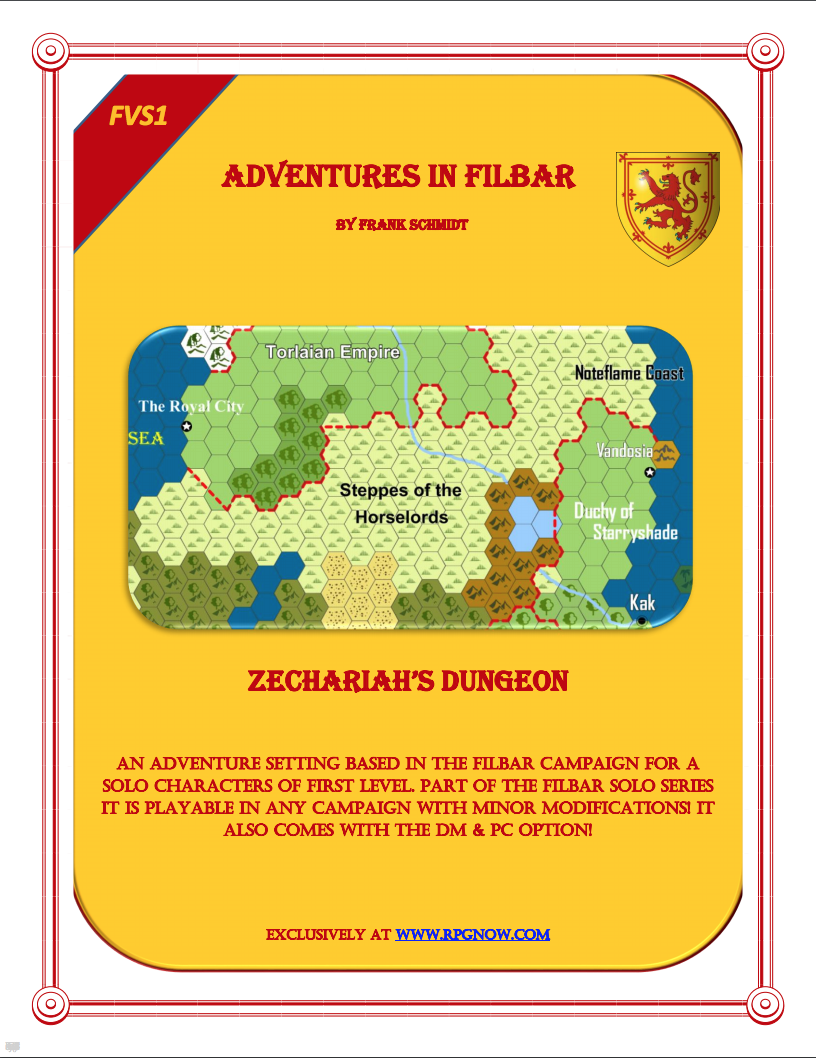 Zechariah’s Dungeon is part of the Adventures in Filbar series and written by Frank Schmidt.  The series itself hearkens back to Classic D&D with modules written for AD&D, as well as the current, 5th edition, which is the system for this module.  The one thing about this adventure that makes it unique from the 1000s of others out there, is that it is truly a solo-adventure, you don’t even need a DM.  Yes, you heard that right, no DM required.  There is a section at the end of the module for running with a DM, but it’s not necessary.

It was the true, solo nature of this adventure that was the hook for me to pick it up, which is currently selling for $3, there will be a link below if you’re interested in picking it up for yourself.  And I’ll say it right at the outset, for the price, I think it is a valiant and successful attempt to provide a true solo, RPG experience and fun way to spend an hour.

I’ve been waffling back-and-forth about whom this adventure is meant for?  It is written for use with a first-level character, which implies that it is for someone who is new to the game and wants to give it a try without having to shell out a whole lot of money to do so.  At other times, I’m thinking it is meant for someone who has difficulty finding a group in which to play because Frank Schmidt already has another true, solo-adventure out for a 4th to 5th level character.  Perhaps it is a little bit of both …

Given the nature of this beast, this will be a SPOILER-FREE review.

Before playing this choose-your-own-adventure style RPG module, I assumed it was meant for a newbie player, and so I went and picked the Noble-Fighter, pre-generated, character right out of the 5th edition starter pack.  This is where I think the adventure veers from the newbie towards the beginner or novice player.  I didn’t read the module first because I wanted to experience it without any hints, but I still did some meta-gaming.  I was by myself, I wanted a physically strong character, I wanted to be able to absorb any damage to better my odds for survival.  Though I will concede that it can be a teaching moment to remind first-time players that your character can die, but is that really something you want to teach in a first ever session?

With that question left up in the air, let’s turn to the actual text.  The Player’s Background provides a decent enough hook to get the player engaged: evil warlock centuries ago, the people rebelled, tower destroyed but unknown dungeon, rumors of a curse, farmer discovers entrance, and because of the rumors seeks an intrepid adventurer with whom to split the booty.  The farmer is a bit jumpy and flees at the sound of birds taking flight as you approach the entrance.  And the newly minted adventurer must now decide whether to follow the farmer’s lead or to find out what awaits below.

Providing the option to flee, pops up at every encounter, which I think is a good way to remind a new player that flight is sometimes a more prudent option.  It seems again to be showing its didactic component.  So those mechanics are definitely present, but … more hints seem to suggest otherwise.  The adventure makes assumptions that the player does know some mechanics, such as rolling for initiative or knowing what and how to use magical items that are discoverable in the dungeon.  Where it does succeed as a beginner’s module, it gives some choices that will teach a new player the type of actions to consider.  The aforementioned, “run away,” as well as searching for items, but those actions do not necessarily require any ‘checks’ to be made, those secondary or tertiary actions are assumed to work, except in a few instances.  The bigger teaching moment is that it has introduced the concept of doing more than simply bashing in heads.  But as a gaming experience, I was slightly disappointed that there were not more of those choices. In particular, I wish the module gave the opportunity to do some more ‘checks,’ at the least to search for traps. Understandably, it would be difficult for the author to make up possibilities for every unforeseen circumstance a player might wish to try.  One glaring absence to an introductory adventure in a role-playing game, is the role-playing.  Certainly one can feel a little silly roleplaying with oneself, but if you’re talking about exposure to the genre, I feel you need a little more than an option to attempt communication with an enemy adversary that provides an automatic, and dare I say, underwhelming response.

So, what about the action and the adventure?  As a single player campaign, for a first level character, it still provided some tense moments. Even with the physically strong player that I picked at the outset, I was killed about halfway through the story. I’m still blaming it on the dice.  Some of the monsters were a little easy for that character, but would still have given a challenge to other classes. There are some goodies to be found in the dungeon that would help other first-level characters through the dungeon with a little luck and making the right choices.  I never had the impression that the encounters were no-win scenarios regardless of the PC’s class, and the balance between easier and hard encounters was sufficient.  It was also nice that despite not having a DM, Frank Schmidt did not have a specific route through the dungeon that needed to be taken.  The player does have choices.

In addition, the module also provides a section at the end to run it with a DM. There were some minor discrepancies between the true solo adventure and the single player/DM mechanic, especially in the final room. The DM section is also one of the reasons I believe this module is more for the beginner but not completely new player. The DM notes provide a lot more description of the areas that would allow a good Dungeon Master to fill in a lot of the color to the story. Someone who is not used to this type of game might not be able to fill in a rich world to allow for the suspension of disbelief, and it could come across as just rolling a bunch of dice. There were times in my session that I and the monsters were just rolling poorly, and I was ripping through encounter turns quickly.

In the end, I love the concept of this type of adventure. It isn’t always easy to find a group of people with whom to play a tabletop game or schedules sometimes just don’t mesh for a couple of scheduled sessions.  This type of adventure can scratch that RPG itch.  With that being said, this genre will always lack the magic of what makes D&D or any RPG-game so great – people playing and socializing together – but I do think it is a worthwhile and supportable attempt. Though I would rank “Zechariah’s Dungeon” as middle of the road, I see it as a work in progress; which is why I am looking forward to Frank Schmidt’s sophomore outing of a true solo adventure, Heart of Darkness, that came out this summer.

You can also check out the video form of this review on my YouTube page.